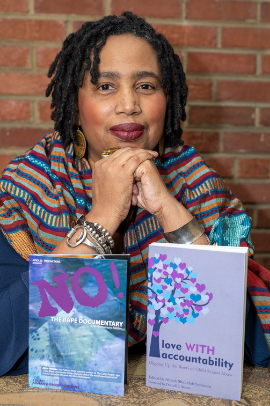 Aishah is an award-winning Black feminist lesbian cultural worker, who, for over 25-years, has examined the intersections of race, gender, sexuality, and sexual violence. Her creative work, published writings, international lectures, and independent scholarship are informed by her lived experiences as a child sexual abuse survivor, adult rape survivor, and Buddhist practitioner committed to healing, accountability and compassionate justice.

Aishah is one of nineteen recipients of the 2020 Soros Justice Fellowship. Her next project will complete her trilogy of Black survivor-centered cultural works that utilize storytelling as a praxis for ending adult rape and childhood sexual violence without relying on the criminal (in)justice system. She has also begun a two-year training program to become a Mindfulness Meditation Teacher, which she views as a continuation of her long-term Buddhist practice.

Aishah began telling stories cinematically in the early 1990s under the guidance of her teacher, the late Toni Cade Bambara at Scribe Video Center. With her self-defined AfroLez®femcentric pen and camera lens, she wrote, directed and produced her widely acclaimed short videos Silence... Broken ©1993 and In My Father's House ©1996 address race, gender, homophobia, rape, reproductive justice, and misogyny.

Aishah organized and edited the 2020 Lambda Literary Award-winning, anthology Love WITH Accountability: Digging Up the Roots of Child Sexual Abuse (AK Press, Fall 2019). The diasporic Black contributors to this collection use transformative first-person storytelling to explore how we can center survivors' healing processes, and simultaneously address childhood sexual abuse without relying on policing and prisons

Aishah is most widely known for her 2006 groundbreaking, internationally acclaimed and award-winning documentary feature film, NO! The Rape Documentary. Twelve years in the making and funded by the Ford Foundation, along with many other funding partners, NO! exposes the taboos that cover-up rape, sexual assault, and failed accountability in African-American communities. The film brings together leading and emerging Black scholars, theologians, artists, activists, men, women, and survivors to break silences and commit themselves to reshaping patriarchal cultures of violence against women and queer communities; and, to look at healing in those communities. NO! amplifies the imperative need for survivor-centered, non-carceral accountability. A precursor to the contemporary campus anti-sexual assault movements, NO! was ahead of its time. Its' 2006-world premiere at the Pan African Film Festival in Los Angeles, CA occurred one-year before Title IX was successfully applied to campus sexual assault cases.

​Knowing Your Community: Partnering with BIPOC Folks for Change

END_OF_DOCUMENT_TOKEN_TO_BE_REPLACED

Request for Proposals for a Virtual Conference Planner

WCSAP is sharing this Request for Proposal (RFP) in…

END_OF_DOCUMENT_TOKEN_TO_BE_REPLACED

The Director, Clinical Services serves as a leader on RAINN's Victim Services team, which provides anonymous…