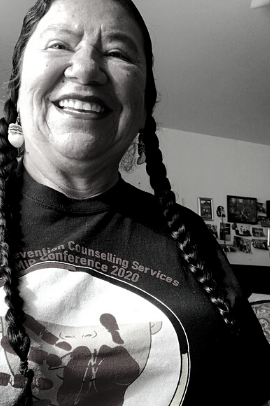 Theda New Breast, M.P.H. (Makoyohsokoyi-Blackfoot name): Born and raised on the Blackfeet Reservation in Montana, with a Relocation experience in the SF Bay area during the Civil rights Movement, entering UC Berkeley at 17 years old and receiving her B.S.W & M.P.H. in Health Promotion and Prevention. Theda is a founding board member and master trainer/facilitator for the Native Wellness Institute (NWI) 1988-present. She is also a board member of the Sovereign Bodies Institute (SBI), launched in 2019, builds on Indigenous traditions of data gathering and knowledge transfer to create, disseminate, and put into healing on gender, sexual violence against Indigenous people and MMIWG (Missing Murdered Indigenous Women & Girls). Theda has been a leading authority on Indigenous Cultural Resilience Internationally in Canada, Lower 48, Alaska, Australia, and New Zealand on Proactive healing from Historical Trauma, Post Traumatic Growth, Mental Health Healing and Sobriety/Recovery/Adult Children of Alcoholic (ACOA). She is co-founder and Co-writer of the GONA (Gathering of Native Americans) curriculum, one of the Ten Effective Practices and Models in Communities of Color. Theda is a Khan-nat-tso-miitah (Crazy Dog) Society member and Kaamipoisaamiiksi (owner of a Standup Headdress) Blackfoot Women’s Society. She Sundanced with the late Buster Yellow Kidney’s bundle for 10 years. In 2013, The Red Nations Film Festival Honored Theda with a Humanitarian Award for her lifetime of healing work with Tribes and with a Red Nations statuette for her documentary short called, “Why The Women in My Family Don’t Drink Whiskey” (Free on YouTube). The Blackfeet Tribal Council has recognized her Leadership skills and appointed her unanimously to The Board of Trustees for the Blackfeet Community College for years 2014-2017. She is currently certifying Healthy Relationship Trainers for NWI, which is a curriculum identified as “Best Practice” from ANA (Administration for Native Americans).

END_OF_DOCUMENT_TOKEN_TO_BE_REPLACED

There are no WCSAP employment opportunities at this time.

END_OF_DOCUMENT_TOKEN_TO_BE_REPLACED

There are no Non-WCSAP employment opportunities at this time.